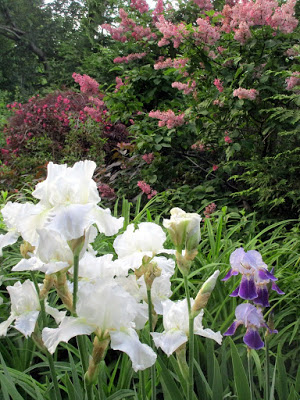 "Where are the songs of spring? Ay, Where are they?"
Keats once posed this rhetorical question, although in a poem that was actually, and famously, about autumn.
Well, here's one of them, up on the new August 2020 issue of Verse-Virtual.org. It's titled "Et in Arcadia Ego," and is actually about June, a month most of which makes it into the 'spring' category according to the astronomical calendar. (Meteorologists prefer to say summer begins on June 1.)
I wrote the poem looking at our perennial flower garden on a day in early June when the Iris were blooming and the blossoms on the lilac tree were still holding strong. The poem also names some of the other plants blooming within my viewspace on that day.
The title is the sort of phrase that people now call a "meme." Translated as "And I was in Arcadia." Or, "I too was in Arcadia," the phrase has been traced back to various origins. To famous paintings, in which the "I" stands for the figure of Death. To Virgil. To other other sources.
My understanding is that "Arcadia" means the most perfectly untouched natural paradise you can find on earth. One line of scholarship locates that place in the most remote rural part of Ancient Greece, where 'shepherds' -- another meme, standing for those who were naturally good and completely uncorrupted by civilization -- composed pastoral love songs in good clean unsophisticated fun.
This notion of "Arcadia" places it in the Greek peninsula -- called the Peloponnesus -- where Anne and I and our adult children visited a few years back. So, in one sense, I too have been in Arcadia.
My poem, of course, is simply about finding that perfectly natural place in your own backyard, or wherever your special places are.
Here it is:
Et in Arcadia Ego

I have two other poems in the August Verse-Virtual. You can find them here.
My Poems
To find all the poems and other content in this month's issue go here:
Table of Contents
Please take a look!
fer.. get ee  s... s s
Posted by Robert Knox at 9:15 AM No comments: 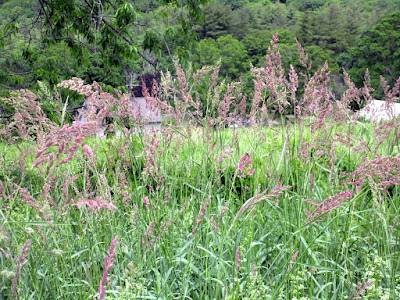 Roadside in the Berkshires

The grass is alive
It raises its own banner,
seedheads, flags for the future,
more colorful than
grass should be
all of this wild, unharvested
The treed hillside behind
The unploughed field in the middle distance
the works of man part of an anonymous background
Impossible to recall
what role they might play 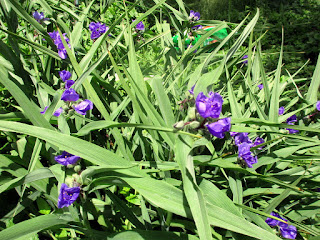 Pure chaos, they grow everywhere,
tumble on one another,
underfoot, flop across the path
Dark most days,
then light up on no man's schedule
purpling around the property,
which in my country, is no sort of crime 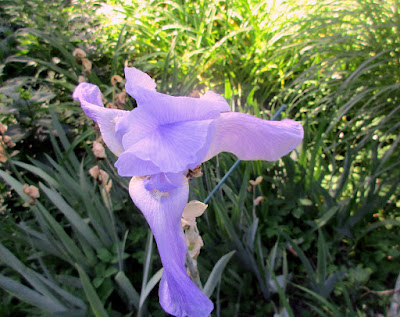 Last Iris of the Season

Already a shade rumpled,
all its flags beginning to droop


Purple was the royal color
once, preserved for a caste
of blood
But this soft tint leaves room for the bourgeoisie
and even those who work
by hands,
channeling earth to make art 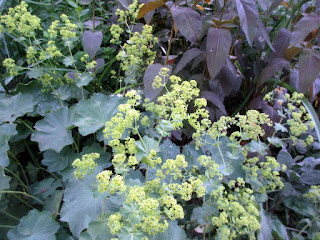 They don't mean Mickey
It's no longer a word we use
The leaves, cupping raindrops, curve slightly upward at the edge,
the size of children's hands,
catching water for the fun of it,
dribbling it out,
where it will do most good,
building yellow, small-change flowers
for the eye

Why, in the end, they grow on you 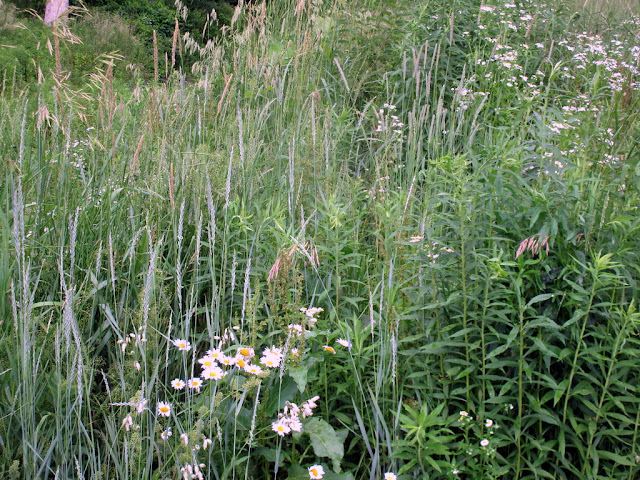 Another happy meadow
Those daisies, lower left,
standing straight up, offering their
yellow-spot umbrellas
to the sky above and the smiles of passersby,
whether six-legged or two

Shasta daisies, truly wild,
or escapees
from Ma's Sunny Garden
And yet they do not endure the
snipping of their stems
and bow their heads in sorrow 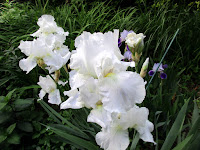 'Don't pick these flowers,'
the sign should say
The glow only
from their roots
Posted by Robert Knox at 11:51 AM No comments:

The Garden of the Seasons -- Images from June 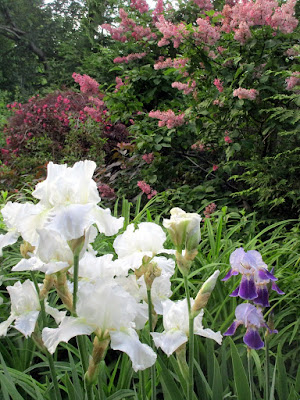 Lilac lover of lonesome
perfume
looming over the land

Lincoln's last train ride
across a land of weeping 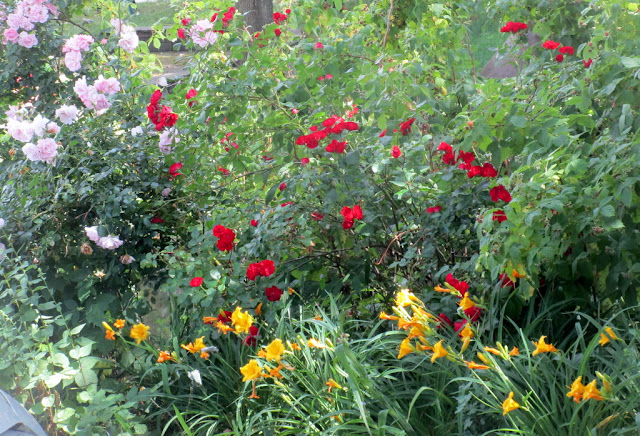 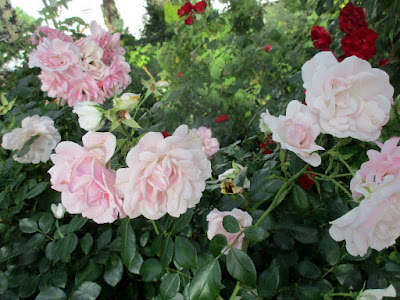 Lifted to the light
That short, soul-eating
lingering light

What day is this?
We know what day it is
We know it is the day that does
not endure
And yet we rise 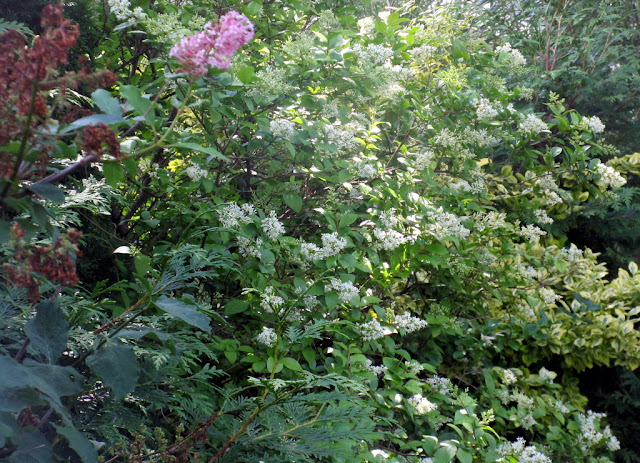 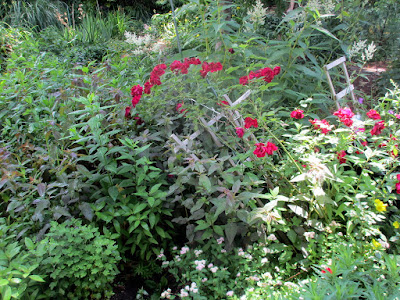 And up to the light
Creatures of borders,
boundaries
Pinned to earth
Anchored by the twist
of unseen forces
the mineral devouring hairs
that probe the depths
for sustenance

So much elevation
resting on the hunger
of roots
Posted by Robert Knox at 10:01 PM No comments:

The Garden of Verse: The Poems of Our Season -- Verse-Virtual Poets See the Way Things Are in Fresh Ways 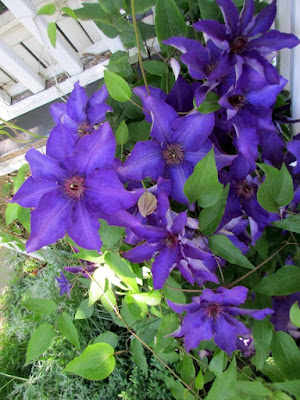 It's summer, season of memories, deep emotion, and stirring metaphors of growth and decay. In the June issue of Verse-Virtual Poets offer fresh views of the way things are and on the realization that they're not necessarily the way we wish them to be.
In Neil Creighton's "Morteza's Choice," the narrator, a refugee in what strikes me as a nightmare landscape of a crumbling (or already crumbled) societal disruption, tells us what he sees and feels, including this strongly expressed vision:

In Joan Mazza's two beautifully moving poems I sensed something of the response of many of us to the challenges of Covid Time. Her "Telephone to Another World" gives one of those sublime metaphors for our need to the talk people we no longer can, but find ourselves, sometimes, talking to them in our minds. Here's the poem's account of a "Wind Telephone":


"...where the veil between worlds is thin, the dead


can hear your news of graduations, your purchase


of a home surrounded by oak trees, daffodils, iris,


perfect haven for a pandemic quarantine.


I used to call my mother in New York and then


tune her out, let her criticism roll over me without


say, Are you eating well? You need a haircut."


Yes, I need one of those phones. There always seems to be a lot left unsaid.


Sylvia Cavanaugh's "Servant Leader" offer us another image rich in its imaginative applications, in her account of flocks of blackbirds who "circle as of one mind." The flock becomes a heuristic for the understanding of time:

"Youngsters are born into this timeless flock


yet still the dance goes on.


A century ago the murmuration circled


over women hanging out laundry


A millennia ago it glimpsed the earlier people


And then it also becomes a metaphor for human 'flocks.' A strong and vivid poem.


Donna Hilbert's "Days Waiting" is another poem that reveals itself as a response to the sometimes ill-fitting cloak Covid Time has dressed us all in. In an enumeration of life's inevitable waiting periods, that I hear as a chant, the poem tallies:


"days waiting for summer to start


days waiting for summer to end


days of migraine, nights of malaise


days of tedium, nights of dread:


I want them back


not for exchange, but to exclaim


Everything matters, the poem tells us. Is this what we're learning?


At least, Michael Gessner's insightful poem "Morning Words" tells us, we still have mornings. His poem expands our way of looking at this daily phenomenon:


to the world, a golden zone."


This is a poem that scratches the surface of one of our most common everyday experiences, blows away the dust, and polishes the real thing. It also gives me another reason to get out of bed.


Barbara Crooker's "Still Life With Aubergines, 1911," a graceful conversational poem about Matisse's dynamic still-life, ends with some sound advice about the physical as well as the painter's artistically depicted eggplants. These words not only apply to the kitchen, but turn this fruit of a long, warm growing season into a metaphor for our real summer:


"It could be bitter if not cooked properly.


But salt it first, then simmer on low


all afternoon, releasing its sweetness,


reminding us how summer is fleeting;


reminding us our days in the sun are brief."


Judy Kronenfeld's three lovely poems are all about the language. We're seeing common experiences anew in these poems as well. In "Window Blinds Leaking Light" it's a child being put down for an afternoon nap, a mother opening and closing the blinds:


"She clicked them up


when I drowsed full


them down when rose light faded


to the color of their faded ribbons."


As if this isn't gorgeous enough, we learn of an early morning waking:


here and there on the black blanket

Tamar Madison's three poems give us metaphors for thinking about experiences many of us have probably known and possibly wish we haven't. The title of "When the Mind Unwinds" offers us the image of a damaged film strip to stand for memory impairment.


And then immediately gives us a second one:


"The bridges that once


into a jumble of rotting planks


Chances are we have to pick our away through this construction debris to attempt contact with an aging loved one.


I was even more startled by her poem "The Guys Who Work Inside My Head," who, as the poem explains, when memory drops a stitch come to the rescue:


"I only have to wonder aloud and move on


to another thought when I feel a little tap


on my shoulder or sense the presence


of a calm being behind me and there he is,


or she, or it, handing me a folder


wrapped in a metaphor containing


the datum I couldn’t bring to mind


that short time ago."


Beautifully inventive writing. Now, I tell myself, I have a happy way to think about what's going on when the word or name I've lost Monday wanders back, unsolicited, on Tuesday afternoon... I must say however that there are times, and days, when I fear the "guys" have lost my address.


These are also the poems of our times. Some of us working, possibly harder than ever; many of us taking our temperature, possibly a bit too often.


These poems and many other memorable lyrics are available at http://www.verse-virtual.org/poems-and-articles.html