The Garden of Storytelling: Heiberg's Twitch 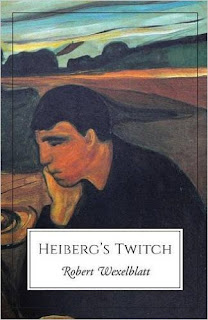 The title story in Robert Wexelblatt's new collection of stories, "Heiberg's Twitch," builds on a classic story-telling arc. We're given a character with a problem, and a community with a different problem. How will these two dynamics interconnect? Our character could exist anywhere in the world, but his story places him (like most of us) in a very specific locale, in Heiberg's case an isolated harbor town. The particularities of that setting give the narrative its second pole: the locals' problem is that a great beast has chosen to crawl out of the ocean and die on their shore. Can the learned professor, who is understandably more concerned with the destiny that has come to him, tell them what it is?
A fair number of the involving and highly readable stories in this collection deal with facing a destiny, living with a problem, coming to terms with a limitation. Their resolutions involve
making peace with these problems, or simply learning to live with them and perhaps accepting them, seeing things as they are. Some protagonists in the kinds of stories we are all familiar with triumph decisively over their antagonists -- those stories tend toward fable. A couple of these are here, such as the tale of the likely peasant lad who saves his realm, and its people, from disaster.
Altogether, "Heiberg's Twitch" offers an impressive variety of fictive flight paths with recognizable story arcs. Fables, father and son conflicts, artists with a crisis, characters with a personal problem, characters with a societal conflict.
These stories also have a quality, almost rare today, of satisfying story structure; beginning middle end. They don't read, to put things another way, like fragments of something else, hybrids, genre-benders, cross-media experiments, openings with no ends in sight, 'meta-fictions,' flash fictions, parodies. They feel like stories; not like essays, memoirs, or experiments with form.

The worthy youth from a common background, for example, survives intrigue and other dangers in an imperial Chinese court to preserve peace in the empire, saving thousands of lives.
In another ("Edith Fevrier") a seasoned veteran in his profession is confronted with a precocious amateur, an 11-year-old autodidact with an advanced vocabulary.
An artist wins a big prize, but his real contest is a Freudian rivalry with his father. Harold Bloom might call this an "anxiety of influence" story.
A son receives a puzzling gift from an otherwise unforthcoming father: a household god who lives in a cage attached to the wall.
Set in post-Cold War Germany, a classic con is practiced in the literary field ("Kafka's Pen").
In an instance of the story based on a reversal of common expectations, a brilliant composer struggles to keep off a commercial success he fears would weaken his creative powers. How can he evade Mammon's attempt to give him a prize?
A fable about tribalism and nationalism intriguingly titled "Mesopotamia" transpires in a setting with an Eastern European flavor. Borders may change, but the relationship between the state and the individual is ultimately the same. The story reminds me of Machiavelli's dictum, "But the world consists of nothing but ordinary people."
A contrasting types story, "Two Poets" pits polarized temperaments. The success: worldly, charming, self-loving, corruptible. And the hermit: puritanical, solitary, rejecting the world's illusions along with its pleasures.What happens when the two meet?
A female bildungsroman gives us an intelligent young woman whom life keeps forcing into limiting roles, including that of "Harmony," a voiceless symbol in a famous Greek play. This  story, "Eirene," strikes me as more expansive and novelistic than the foregoing pieces, with the kind of background build-up that could sustain a longer story.
The more expansive vein spills over into the collection's final pieces, which both satisfy in their current form but (to me, at least) suggest paths for further development.
A story titled "Ten-Minute Novel" (but will deliver more than a ten-minutes read) explores the kind of closely plotted, multiple point of view fiction we see in sequential TV or a movie screenplay, concluding with an ensemble action sequence.
Even more provocative is the story of the dalliance of the photographer and the emerging writer, who use each other in a creative alliance. The big payoff here is Wexelblatt's skillful exploitation of an archetypal urban experience. Who (we ask ourselves) is that person sitting across the aisle on the subway? What is his or her story? Plenty of grist here for the emerging writer -- or, I suspect, any writer. The story ("Urbs Fabula Sine Argumentum Est") is a tour de force in character-sketching.
Most daring of all, perhaps, is the concluding piece, "The Withdrawal of Wawanu," a tale set in the minds, societies, and rituals of people who we are not like us. In fact to them, the story tells us, we are not people at all; we are "demons." Can't risk spoilers by going any further here.
"Heiberg's Twitch" is the kind of collection that tells you the short story is alive and well. Can we (for instance) imagine a precocious kid who is not a brat -- less concerned with showing how smart he is than doing a good turn for his mother? This author can. A piece of my own heart remains stuck on the story of a failing professor and a symbolic twitch -- the kind of problem that only a gesture of kindness can relieve.