Singing the Day Away: The Cappella Clausura Chants the Hours 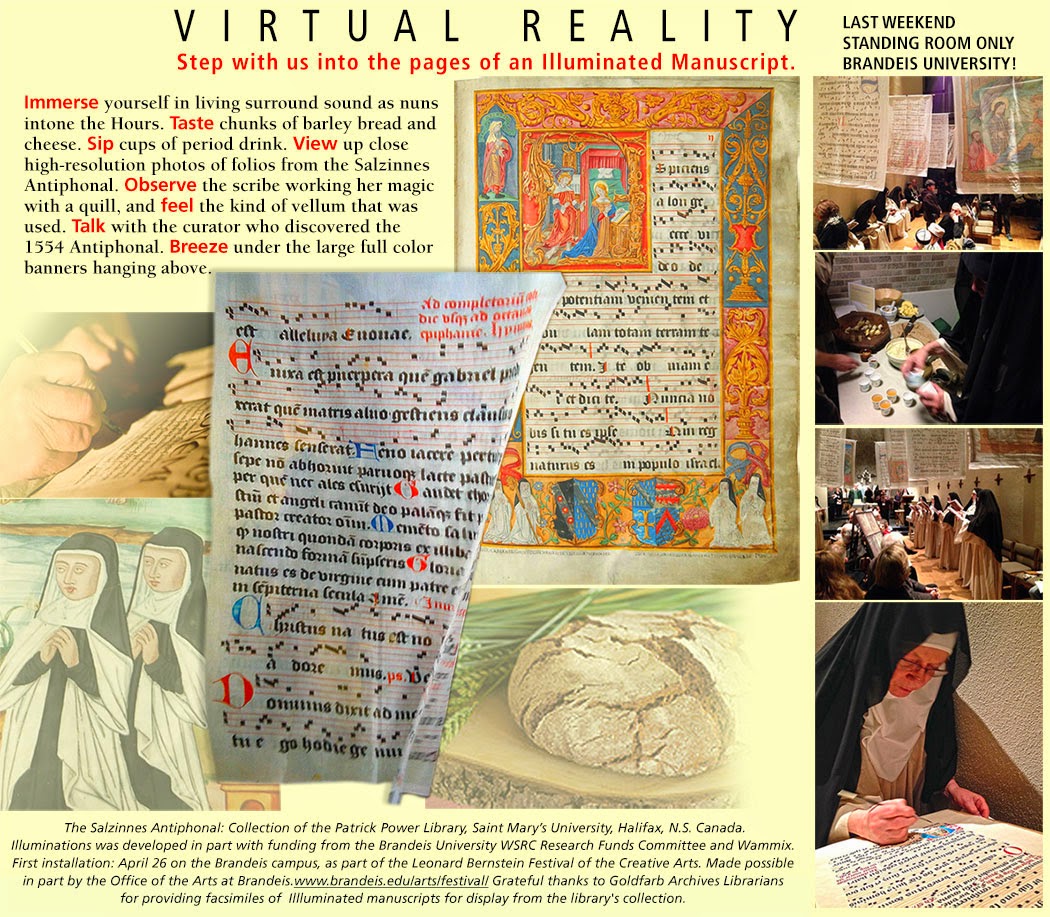 The voices in the chapel were beautiful and resonant. We followed their sound. Angels' voices. The voices came from a place far different from the secular city whose streets we enjoyed walking in the spring evening -- the "world" these voices had given up.
In the Gothic chapel cloistered women were singing the hours.
Well, the singers would have been cloistered in the time and place when the music book they were singing from was written, the middle of 16th century (1554), when nuns who spent their lives in closed convents chanted the liturgical hours.
The women we found when we followed the voices into Lindsay Chapel of Emmanuel Church in Boston were the Cappella Clausura, a Brandeis-based ensemble founded by Amelia LeClair and dedicated to "the research and performance of music by women composers."
They were wearing traditional habits. As the concert invite put it, "Please don't speak to the nuns. They are, after all, in another century."
We had missed the beginning. Voices are singing when we enter. The Gothic ceilings of the narrow chapel amplify the sound. The sound of their voices is almost impossibly full. It's as if the space itself -- the enormous steeply pitched mountain of upward-thrusting space, squeezed in at the sides -- a space like a balloon blown up by the breath of centuries -- is itself an instrument that these women know how to play.
I have been dimly aware of the practice of "chanting the hours," excerpts of the traditional practice flashing before us in TV shows and films, always to an instantly attention-getting effect. I thought it would be beautiful to hear the chants sung all the way through, but I never knew that much about the practice. This singing of Matins, of Vespers -- is it long? Do they do it every day?
I knew these appointed "hours" were sung at certain times each day and I wanted the experience of hearing the canonical hours sung without the necessity of spending a full day inside a cloistered religious community. If that's not a contradiction in terms. Did no one else ever hear these beautifully sung offerings but the singers? Is it just another form of prayer?
I wanted the musical highlights of a day spent (amid so many others) in contemplation. Getting it this way, through the "concert and installation" by the Cappella Clausura was a kind of cheat. But it was a sweet cheat.
The evening's format was some five minutes of singing, a little more sometimes, representing the canonical hours: matins (3 a.m.), prime (6 a.m.), terce (9), sext (noon), nones (3 p.m.), vespers (6 p.m.) and compline (9 p.m.).
The women would enter the hall, sit in chairs on each side of the hall, while short rows of audience seating filled the room's narrow middle, and sing from their books. We found seats, not many left, before I knew who was singing. Where did the voices come from? Must be a hidden choir somewhere. But no. I counted four seated, cloaked women on one side, three on the other. The four were mezzo voices -- plus a fifth I spied a few minutes later, their leader: she raised her finger upward at points: at the 'amens' for instance. The three were sopranos.
The hall's acoustics, and the music itself, added numbers, centuries.
Then the leader would ring a handbell and the singers would either withdraw or stay in their chairs and pick up their needlework or their missals. The break would last about 10 minutes before they came back to sing the next ordained hour on the daily routine.
We were encouraged to explore the installation between the "hours." Illustrative pages of the calligraphy of the muscial score themselve -- some few notes on a cleft, some Latin letters unreadable in their stylized form -- hung above us. Others were mounted on stands. Some folio pages from illuminated manuscripts were displayed.A calligrapher displayed hand-ground paints on the mussel shells used to hold them.
Large, poster-size pages of the illuminated manuscript from which this version of the hours was discovered were also displayed (in high resolution repros). And the curator -- happily there in our own century for the purpose of talking to us -- kindly explained the story of this manuscript's discovery. Art historian Judith Dietz found what is called the Salzinnes Antiphonal in the library of St. Mary's University in Nova Scotia, Canada. It had been sent there from France during the French Revolution when religious institutions were under attack. In a highly rare practice, the large colorful illustrations depict all the nuns who were part of the Salzinnes community when the antiphonal (the music you sing; the word means something like "in front of the altar"). She found their names as well.
Women dressed in habits also offered samples of the beer, bread and cheese the nuns of Salzinnes would make.
According the program and the group's website (www.clausura.org) Cappella Clausura’s name honors the body of music written by cloistered nuns of 17th century Italy. "In clausura" means covered or hidden from public life. By name the group cites Raffaella Aleotti, Chiara Cozzolani, Bianca Maria Meda, Caterina Assandra and Sulpitia Cesis -- the West's first school of women composers. We picked up the group's latest recording, Aleotti's madrigals here titled "Love Songs of a Renaissance Teenager."
These are not liturgial chants, but they make wonderful listening on their own.
Posted by Robert Knox at 12:17 PM